Two seasons after he and his Cabrini teammates won the Division III men’s lacrosse national title, Ty Kostack came back for an encore in 2021.

It might have been the easiest decision of Ty Kostack’s life.

Just one year earlier, Cabrini Lacrosse’s 2019 title run ended with Kostack hoisting the NCAA Division III championship trophy over his head. More than two decades after Kostack’s father, Joe, enrolled at Cabrini and played for the lacrosse team, Ty had finished the job.

2020 was supposed to be the season in which Kostack, then a senior, could help his team defend that title, the first in Cabrini’s history. But the season was canceled due to the COVID-19 pandemic, and Kostack was not sure he would ever get the opportunity.

Just a couple weeks later, Kostack found out he had the option to take a fifth year to return and defend Cabrini’s title.

It was a no-brainer.

“Everyone knew I was going back if I had the chance,” Kostack recalled. “I told everyone, ‘I’m not done.’” 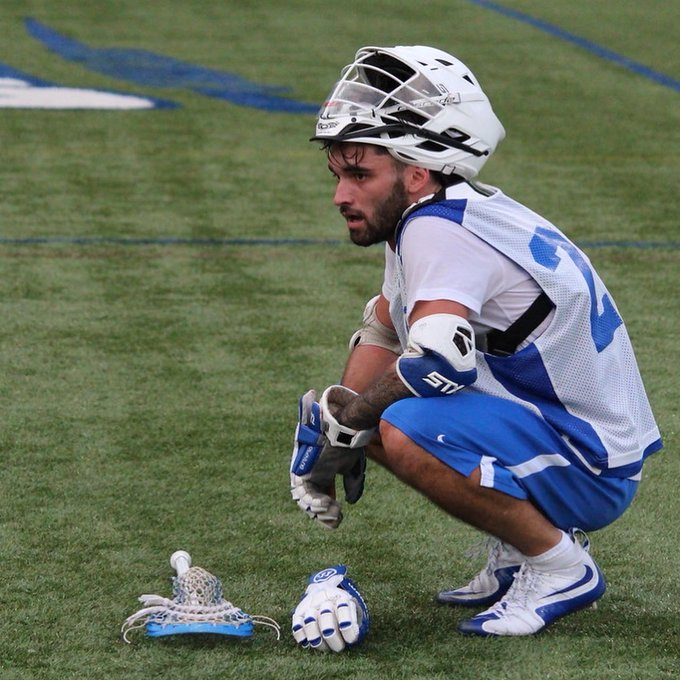 Ty Kostack had a stick in his hands before he could even walk. That’s what Joe Kostack will tell you.

Lacrosse runs in the Kostack family. Joe was a two time All-American in high school and committed to play at Loyola University. But everything flipped on its head when, as a senior in high school, Joe found out he was having Ty.

Joe ditched his commitment and spent a year playing lacrosse at Cabrini before dropping out to take care of Ty. But while his dream to play lacrosse fizzled, another one was born.

Even though Ty was introduced to the sport at a young age, it was years before he could play organized lacrosse. By then, Joe had moved across the Delaware River to the South Jersey town of Swedesboro and Ty stuck with baseball during his elementary school years.

When Kostack was in seventh grade, his family returned to Newtown Square in suburban Philadelphia. It was here that he began playing lacrosse competitively in a career defined by facing and overcoming adversity.

During the fall of his freshman year, Kostack tried out for a local lacrosse team called HEADstrong. He was sick the week of the tryout, but insisted that he had to go for it. He didn’t make it past the first cuts. But this didn’t hold him back.

“I was heated,” Kostack said. “I was like, ‘I know I’m good enough to play on this team.’ It just fueled me more.”

This motivation helped Kostack dominate in his freshman season at Marple Newtown High School. In his second game, he scored eight points and made headlines in the local paper. He got a call from Brian Neary, the head coach of HEADstrong, and found out that he made the team.

Kostack broke his high school’s varsity points record for a freshman that year, giving him plenty of momentum heading into his sophomore season.

But, in just the second game, Kostack dislocated his left shoulder when passing over his head in a game against Haverford High School. He spent the rest of that spring rehabbing in preparation for a big summer: he wanted to be able to to commit to a college prior to his junior season

While Kostack had been heavily recruited by Cabrini head coach Steve Colfer, who had also coached Kostack’s dad, he had no interest in staying local. He ultimately decided on High Point University, a Division I school in North Carolina, before his junior season.

With just 30 seconds left in the second game of his junior season, Kostack felt a familiar pop in his left shoulder when he threw his stick up to defend a pass. It was dislocated again, and this time, rehab alone would not suffice. He had to get surgery.

This wasn’t going to stop Kostack, who was just focused on getting back on the field.

“I never thought too much about injuries,” he said. “It was more so just put my time in for physical therapy, and then go play and get right back into it.”

He recovered from the injury in time to play football his senior year, and was ready for the lacrosse season in the spring. Kostack scored a team-high 106 points and was named first team all-Central League. In August, he made the All-Star Game for his county, and all was looking up for Kostack — until he received some bad news from High Point.

His SAT scores were not high enough for admission at High Point, so he couldn’t enroll. The school wanted him to go to community college for a year to get credits and transfer in with four years of eligibility. But Kostack had already lost two high school seasons to injury, and he did not want to risk waiting.  He would find somewhere else to go.

“Because of me being out for those two out of four years in high school, I was just like, ‘I can’t do that, I’m not taking any more time off,’” Kostack said. “‘I’m just gonna go find a home for me.’”

That home ended up being just 15 minutes down the street from Kostack in Radnor. Compared to a Division I program like High Point, Cabrini’s NCAA lacrosse rise has been more of a recent thing. The school itself is relatively young and was founded as Cabrini College back in 1957. But Kostack had a level of familiarity with Colfer and the area, and some friends on the Cabrini team. So, like his father before him, Kostack landed at Cabrini at the eleventh hour.

In his first season at Cabrini in 2016, Kostack was a starter right away. He moved positions when the team’s x-attack player, Matt LoParo, tore his ACL, and went on to lead the team with 32 assists.

The way Kostack carried himself on and off the field allowed his teammates to see him as more than just a freshman. He’s never been the cocky, audacious type of guy, and lets his play on the field do the work. And now, he leads in the same way.

Colfer sees it as some kind of charisma.

“Guys are drawn to him,” Colfer said. “He’s not in your face, over the top with instructions and motivations, but it’s still very powerful.”

During his sophomore year, Kostack remained productive despite another position change to the wing and finished top-four on the team in both goals and assists. It was two injury-free seasons for Kostack, and he was enjoying the ride.

But during a junior season game against Salisbury, Kostack felt a similar pop, this time in his right shoulder. It was dislocated, and an MRI showed a torn labrum. The doctor recommended season-ending surgery, but Kostack refused. He’d try to rehab and get back as quickly as he could.

In the quarterfinal game against York College, Kostack’s presence was felt. Cabrini was down, 10-9, with under a minute left. Kostack got the ball, dodged a defender and threw it down to hit teammate Kyle Tucker, who was cutting toward the net for the game-tying goal. Cabrini went on to win in overtime.

The rest, of course, is history. Cabrini won the next two games to complete their championship run. Colfer doesn’t think they could have pulled it off without Kostack on the field, and was impressed with his ability to return as quickly as he did.

“It was unbelievable,” Colfer said. “And without his contributions, I am doubtful that we would have been able to achieve the same goal.”

Kostack’s run was made more special by the connection to his father, who was unable to finish out his dream at Cabrini.

“I always say, ‘I finished what my dad started,’” Kostack said.

For Kostack and his teammates, it was a surreal experience. They played the championship in Lincoln Financial Field in front of a sea of Cabrini fans.

Once Kostack knew what that felt like, he could never let it go.

“I crave that feeling every day. I want to be back, I want to play in that big stadium in front of everyone,” Kostack said.

Ty Kostack may be a lacrosse player, but that is not the only thing he wants to be defined by.

Kostack is an entrepreneur. He shoots photos and videos for local rap concerts. He also started a lacrosse summer camp with his uncle four years ago that has blossomed into two new travel teams. Kostack hopes this experience will help him land coaching gigs after he graduates, something he has always seen himself doing.

He spends his winters snowboarding and his summers surfing. This summer Kostack intends to travel across the East Coast and make a short film on the different places he surfs.

Kostack’s relentless work ethic allows him to be successful at all of these different passions.

“Ty has always been a worker,” Joe Kostack said. “Everything he does, he wants to be better at it.”

This work ethic lends itself to the lacrosse field, too, and played a part in Kostack’s ability to stay in game shape during the cancelled season. It was just another opportunity for him to do what he does best: put his head down and work.

“As soon as it happened I was out on the field the next day,” Kostack said. “I was like, ‘It’s back to the grind. If I can’t play right now I’m gonna do it on my own time.’”

So, that’s what he did. Kostack found ways to stay in shape, whether it meant working out in the basement or sneaking onto local fields to work on his shooting. He had the opportunity to return to Cabrini as a fifth-year senior with an extra year of eligibility, and he wasn’t going to waste it.

Fourteen seniors on the lacrosse team were set to graduate after the 2020 season, and six, including Kostack, decided to return. For those seniors, it was a matter of getting the chance to play again after that title season.

Kostack wants to repeat the magical 2019 season that saw him bring his father’s story full-circle. Along the way, he wants to show Joe Kostack that he appreciates the path that was set for him.

After wearing the No. 7 throughout his Cabrini career, Kostack is wearing 22 — the same number his dad donned during his lone season at Cabrini.

“A lot of people honor people when they’re gone,” Kostack said, “So I want to honor my dad while he’s here and let him know, ‘I’m going to finish what you started.

For Joe, this means the world.

“I had to move on and raise my son and you know, become an adult,” he said, remembering his brief college career. “It’s awesome to see him wearing that number.”

Ty and the rest of the team are off to a great start in 2021. Cabrini is 8-2, with its only losses coming to Penn and Salisbury, who they lost to in the 2019 regular season before beating them in the semifinals.

He has 20 goals, good for second best on the team. But to Kostack, these stats mean nothing. He has only one thing on his mind.

Editor’s note: Cabrini’s 2021 season came to an end after this story was filed. The Cavaliers lost to Salisbury in the second round of the Division III NCAA Tournament on May 16 in Radnor.